One of the sadder stories in Western North Carolina conservation efforts is the story of the Eastern Hemlock. This vitally important tree species is rapidly becoming extinct. On first thought, one might think the Eastern Hemlock is endangered because of human activity. If this was the case and humans were actively destroying the Hemlocks, the Carolina Mountain Club, or any conservation agency could run public awareness campaigns to prevent extinction. Unfortunately this extinction is driven by an invasive sap sucking species called the woolly adelgid. Because the species originated in Japan, woolly adelgids have very few natural predators in Western North Carolina.1)

The Hemlocks are among the most well-known trees in Western North Carolina and many locals are proud of them. Some Hemlocks, like the ones in Carter Creek Falls, grow to 14ft in circumference and some are 100 years old.2) There is a strong population of Eastern Hemlocks within Shining Rock, but the numbers continue to dwindle as woolly adelgids thrive. Pesticides and other chemicals are less effective at reducing the woolly adelgids and are more dangerous. Scientists are currently researching possible biological control, but this might involve the introduction of another invasive species.3) The first step in saving the Eastern Hemlocks from eventual extinction is awareness. Click the picture below to learn more about the Eastern Hemlocks: 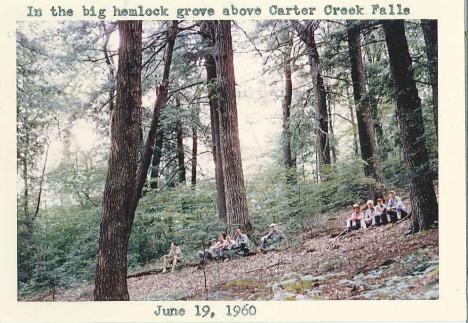