In 1876 outdoor enthusiasts from all along the east coast gathered in Boston to form the Appalachian Mountain Club.1) This national club organized to guard the sanctity of the Appalachian Mountains. Disagreement immediately followed World War I, the national club split to form a Northern and Southern chapter. Despite both chapters believing in the protection of all mountains, the Appalachian Mountain Club of Boston divided. The separation was practical as it happened according to different regions along the trail.  Effective protection proved absurd. How could a single national organization maintain the entire Appalachian Mountain range, and eventually the Appalachian Trail that extends from Georgia to Maine? Even after the initial split, many members in the Southern chapter dissented because the organization still did not provide enough focus on localized problems. Southern chapter dues continued to fund projects in the North. Frustrated, the members left the chapter and founded the Carolina Mountain Club on July 16th, 1923.   Explained in the CMC’s first pamphlet written in the spring of 1924, the Carolina Mountain Club originally aimed to increase public interest in Western North Carolina’s wilderness and outdoor areas.2) Western North Carolina is a beautiful and ripe with many areas to camp, climb, fish and hunt. The CMC, then in its infancy, affirmed building and maintaining trails, lodges, and outdoor facilities as  important projects for WNC’s forest use and protection. For example, the CMC’s first project was dedicated to establishing clubhouses to shelter hikers. Another crucial aspect to the CMC’s mission was leading hikes and tours. This is a Club tradition still upheld today as they continue to host guided hikes twice weekly.3)

See their 50th Anniversary Brochure
On September 24th 1924, the Carolina Mountain Club became a non-stock corporation. This new designation marked the club’s ability to purchase land, an important function for preservation. Soon after becoming a non-stock corporation, the CMC found itself in critical condition. Of the 60 members on their roll, less than half were in good standing. Thankfully, there existed a similar organization known as the Carolina Appalachian Trail Club.  The CMC formed a committee to discuss the incorporation of this other group. Both groups had similar ideals, but there is much unknown surrounding the CATC’s formation. According to Peter Steurer, the CATC was a less expensive and more active alternative to the CMC.4) He speculates that ordinary people preferred the less stratified CATC over the CMC. Many of the charter members in the Carolina Mountain Club were doctors or prominent members of the Asheville community, hence the leadership was dominated by a few powerful individuals. As seen in the charter member list, the Club consisted of wealthy families.5) Many of the names are easily recognizable and seen throughout the city.  The Club also required significant funds for upkeep of the multiple mountain cabins, something an ordinary Asheville citizen could barely afford. On December 9th, 1931 the clubs fused and kept the Carolina Mountain Club name. The Carolina Mountain Club today is more in tune with the mission of the CATC. Currently, the Club desires to increase interest in Western North Carolina’s land use, both for leisure and sport.
Many prominent members were able to keep the Club financially afloat during the difficult years from the Depression leading up to the Second World War. Most notably is the Club’s success after the War. By 1960 the Club surpassed the 100 member mark. Our individual narratives depict some efforts during the CMC’s golden years of conservation. Today the Carolina Mountain Club has over 900 members!
The 1960s was also a time for national conservation. In 1964, Congress passed the Wilderness Act which granted individual citizens the ability to petition specified lands for national wilderness designation. Wilderness “would be protected from all motorized vehicles and equipment, permanent buildings, lumbering, and mining.”6) Today the entire planet is experiencing environmentalism on a new scale. We are using up exorbitant amounts of both renewable and non-renewable resources with little after thought. How is our environment rapidly changing and what can we do to prevent global mass extinction?  Through the conservation efforts of the Carolina Mountain Club, and the creation of this digital history site, we hope to provide some answers to reverse environmental damage.

“Man himself is a visitor who does not remain.”7) 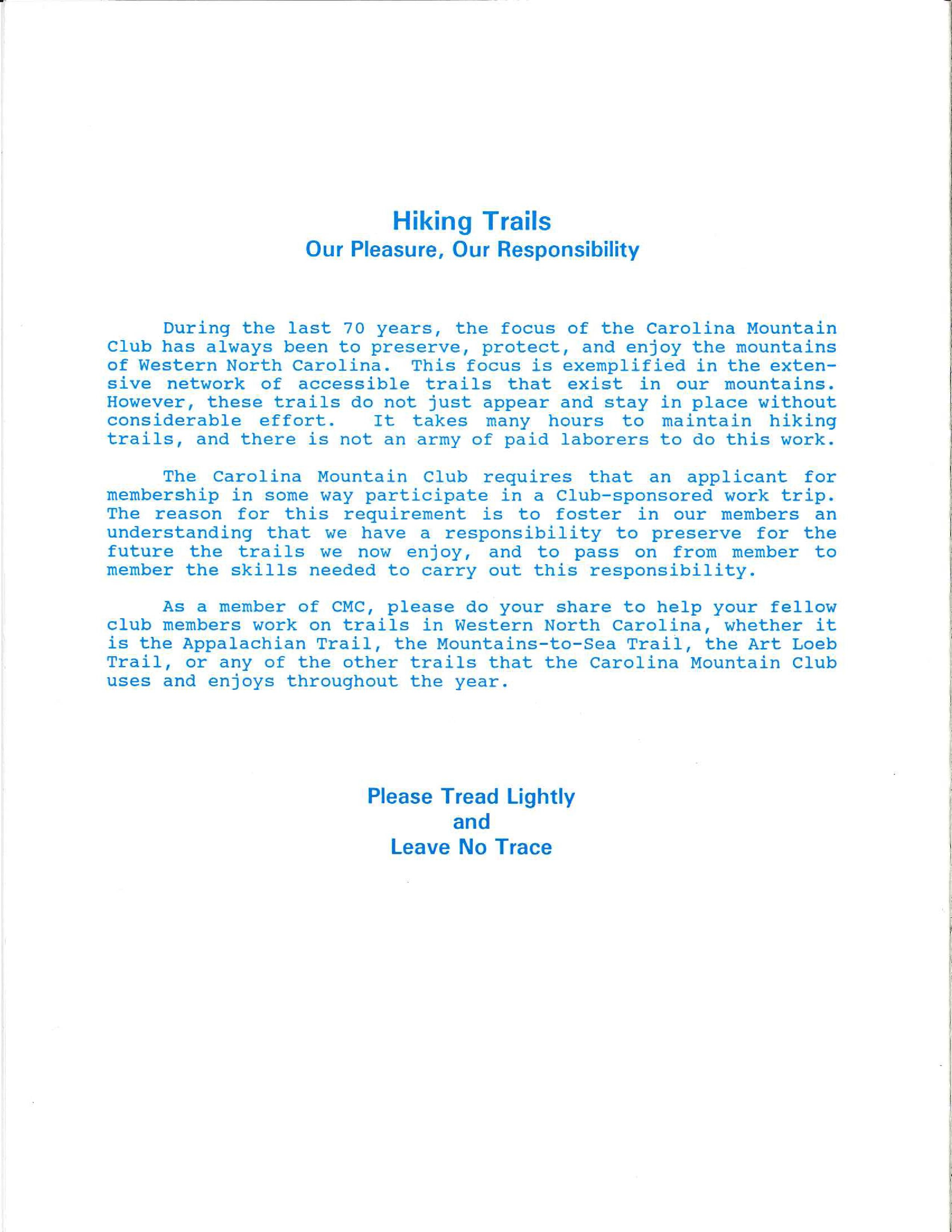